At BCN we think independently. Despite the lure of high commissions, we have never sold Variable Life insurance (not even in VL’s heyday of the late 1990’s). We believe that everyone who reads this article will understand why.

Variable Life is one of the most hotly touted financial products of the last 5 years, so it’s worth taking a minute to review its heritage. Permanent coverage relies on cash values. When the policy is properly structured, premiums can remain level for the lifetime of the insured because interest on the cash value pays for the increasing mortality costs as the insured gets older. In this way policyowners can avoid the inevitable premium hikes of term insurance. Congress gave its blessing and decreed, with a few complicated exceptions, that life insurance cash values can accrue income tax deferred.

With that kind of tax-break, a new and improved “investment” was born. Combined with high tax rates and outrageously high interest rates of the late 70’s and early 80’s, the tax-incentives of permanent life insurance were very alluring. In such an environment many insurance agents began emphasizing the “savings aspect” of life policies – sometimes even in the absence of any insurance need.

Of course, times change. Interest rates fell, not just a little but dramatically. Stock mutual funds eclipsed bonds and real estate as the investment vehicle of choice. 457 and 401k plans became accepted as the surest way to build wealth for retirement. In this new era (fondly remembered as the 90’s), conventional life insurance could not compete – not as an “investment.” 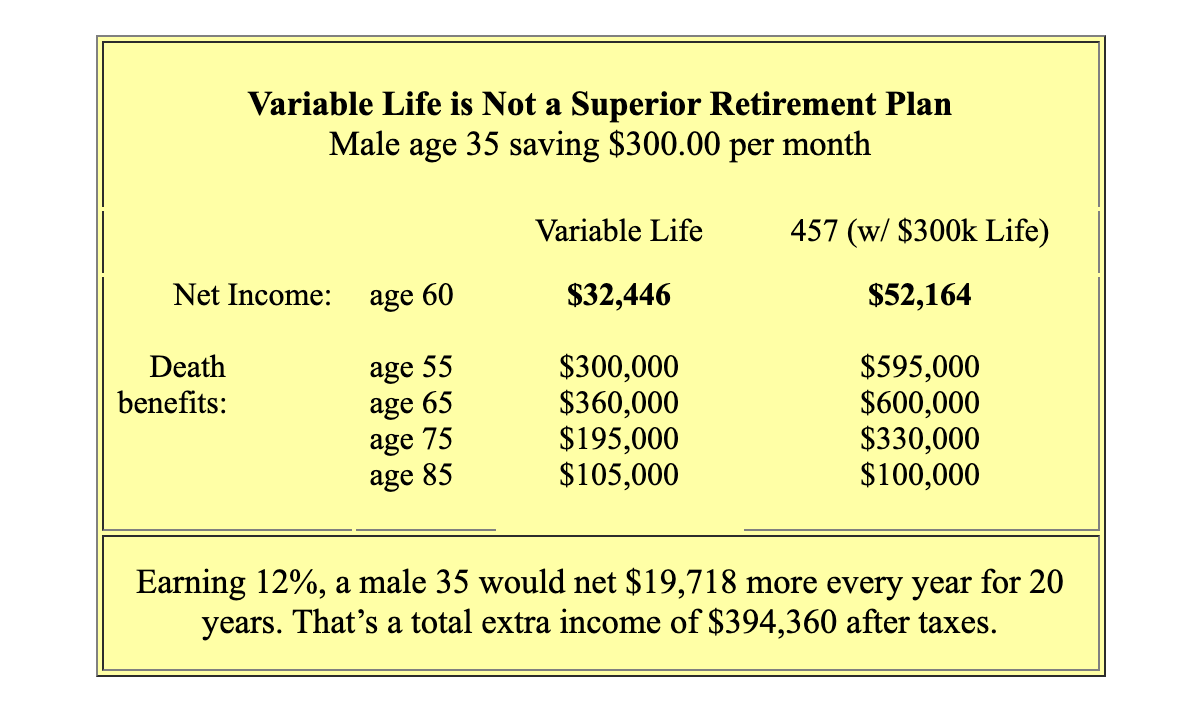 The one remaining advantage of life insurance was liquidity – or accessibility – of the cash values. Unlike other tax-deferred savings plans, cash values can be borrowed from the policy, tax-free, without any requirement to repay. At the insured’s death, these loans are “forgiven.” In this scenario, even though the insured has use of the money for any purpose during his or her lifetime, no income taxes are paid. Sounds terrific – if that’s all you’re told.

Old-style dividend or interest policies couldn’t keep pace with mutual funds. But that was easily solved: Just put mutual funds inside the policies, keep the great tax-advantages of life insurance and voila – Variable Life was born! What could be better than getting stock market returns, yet still be able to tap the money for any reason you want – and pay no taxes. Unfortunately, for most agents who sell this stuff, that’s the only part of story they want you to hear.

Like real estate limited partnerships, so heavily oversold in the 80’s, we feel the story of Variable Life will end badly. Here’s the part you’re rarely told:

1. Variable Life is NOT superior to 457, 401k and other tax-deferred retirement plans. The product is misrepresented as a replacement for all those plans that only “defer” taxes. Yes earnings inside Variable Life can avoid income taxes – but the policy fees and internal charges, combined with the substantial amounts you cannot touch (because otherwise the policy will lapse) far exceed the taxes saved. We compared one of the best Variable Life policies to conventional term insurance and a separate 457 (or 401k) account. In both scenarios (male 35 and male 45), net after-tax income was substantially greater for the conventional plan. Earning 12%, a male 35 would net $19,718 more every year for 20 years. That’s a total extra income of $394,360 after taxes. The higher the return, the greater the advantage of conventional term and 457 (or 401k) accounts.

2. Variable Life will NOT provide a reliable stream of retirement income. Even small changes in the projected rate of return (say 10% rather than the oft-illustrated 12%) will dramatically affect outcomes. In our comparisons, this small difference lowered the projected income by 35%. A severe bear market, especially near retirement, will devastate those rosy income projections. Unlike conventional tax-deferred retirement plans, moving to more conservative investments doesn’t work with Variable Life. Measly bond and money market returns get eaten alive by the internal policy fees. Look at an illustration if you have one. Most show 12% until the day you die – overlooking entirely that policy owners usually shift to conservative investments when they start taking income.

To be fair, there are limited circumstances when Variable Life might be appropriate:

The Bottom Line: Don’t buy Variable Life as a replacement for the far more suitable retirement and college savings plans you already have.

3. Life insurance and the stock market do NOT mix. We buy insurance for health, home, auto or life to provide certainty and stability in our financial lives. With a solid foundation in place, we feel comfortable taking separate risks in stocks, real estate or a side-business. The volatility of the stock market is anathema to the reasons we buy life insurance. And with Variable Life you cannot take thousands of dollars for income without significantly diminishing the insurance protection afforded your family. Death benefits get reduced by the account value (your investments are converted to premiums) and by the amount of any outstanding loans. With conventional term or permanent insurance – combined with a separate investment account – your family gets everything.

4. Variable Life is a ticking time bomb waiting to explode. Agents who sell Variable Life rarely explain the implications of this very material fact: to preserve the tax-benefits, Variable Life policies must remain in force until the insured dies. If the policy lapses for any reason, all the unpaid taxes on all the accrued loans become payable in full in the year of the lapse. Read that sentence again. Thousands of dollars of “tax-free” income – money you’ve already spent – could become taxable overnight, resulting in a bill from the IRS for thousands of dollars. Why would the policy lapse? Because quite reasonably you thought you could spend the money (how many other plans require you to forfeit thousands of dollars to preserve the tax benefits?).

Or perhaps the stock market takes an unexpected turn for the worse (hmm… could that ever happen?).

The bottom line is that most married couples would have to make combined contributions of more than $30,000 per year – over many years – before they have any need for Variable Life. Little wonder the product is so often misrepresented. We have better places to put our money. Most families would not buy Variable Life unless it’s depicted as superior – as a replacement for – the far more suitable retirement plans they already have. Don’t be fooled.